Despite being a listed company, the management of Diginex has not responded to our report, directly contradicting their claim of raising transparency across the crypto industry. Unimpressed by this silence, many shareholders have chosen to abandon ship.

We have received additional information following our report. Some Diginex executives have a troubled background. We have also analysed trading volumes reported on Diginex’s crypto-exchange Equos. We strongly believe that Diginex has used wash trading to artificially inflate trading volume, a technique whereby an exchange creates multiple accounts on its platform and uses trading algorithms to buy and sell with its own accounts.

Our findings have been shared with regulators.

Diginex claimed on 4 May 2021 that combined spot and derivative volume for Equos exceeded $2bn for the last 30 days, a 300% jump over the previous 30 days. However, multiple red flags — including website metrics and exchange trade data — bring these volumes into question.

Equos has an exchange score of 4.8 out of 10 on Coinmarketcap (which “ranks and scores exchanges based on the following: Web Traffic Factor; Average Liquidity; Volume, as well as the Confidence that the volume reported by an exchange is legitimate.”). Peers such as Huobi and Coinbase have ratings of 9 and 8.8 respectively.

Trade history for Equos’s most heavily traded BTC/USDC spot pair from 2pm to 6pm GMT+8 — one of its busiest trading hours — show many instances of trades seemingly coming in pairs, roughly equal in size, and therefore potentially able to offset one-another over time. Numbers are also rounded, unlike other exchanges.

Equos trade history – many instances of trades with matching volume

This suggests artificial volume created through offsetting trades. A 2019 Bitwise Asset Management report describes how normal trade activity tends to be random as reflected in other exchanges’ trade data (see images below). The screenshots of executed trades on Equos show alternating trades of similar volume (e.g. 0.015BTC and 0.100BTC) being made within a few seconds. Other exchanges exhibit greater variation in trade size.

We have considered Equos’s user activity based on monthly changes to spot volume per visitor as an indication of its popularity and usage. Its movements have been erratic and unexplainable.

Source: Nomics, SimilarWeb, and Iceberg computation
Note: Only spot volumes have been used in the calculation for better comparison between exchanges.

Equos seems to have found success in France which accounts for 27% of its webpage traffic, according to web analytics platform SimilarWeb.

This is quite surprising. Most of Diginex’s operations are in Hong Kong and the company does not have a French version for its website. In addition, Google Trends for France (see below) indicate any interest in Equos over the past 90 days has been ephemeral and meaningless.

The US is Equos’s second largest source of traffic. Again, this is puzzling as Equos is not licensed [p7. prospectus] to operate a crypto-exchange in the US, which means users in the US aren’t able to use its platform.

SimilarWeb data shows each Equos visitor spends about 22 seconds on its website, far lower than the time spent on the sites of peers such as Kraken, Coinbase, and Binance.

The abovementioned Bitwise report states that trade volume on trusted exchanges follow certain patterns in general i.e., authentic volume should move in tandem with trusted exchanges, even during periods of volatility and price movement.

Using hourly spot volume for BTC/USDC (Equos’s most heavily traded pair) from 3 May 2021 to 16 May 2021, we found that trade patterns at Equos were random when compared to reliable exchanges over the same period. As shown below, the correlation between Coinbase and Binance’s volume was 0.71, while Equos’s correlation with these exchanges was weak at 0.12 and 0.11, respectively. 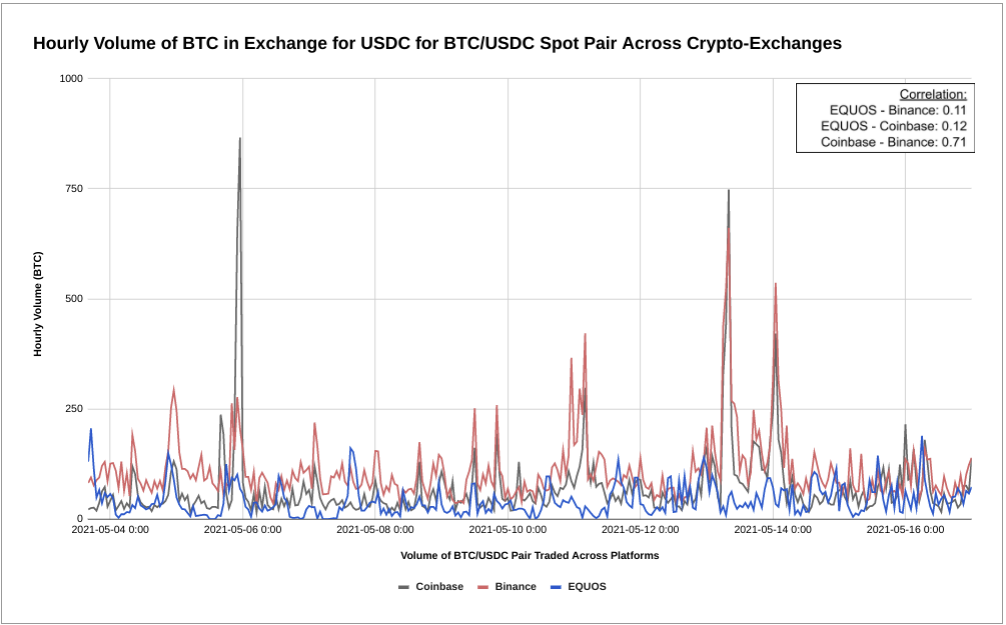 Part 2: Troubled background of Diginex’s top executives, previously at an exchange plagued by a huge technical blunder, and accusations of traffic manipulation

Prior to joining Diginex as head of Exchange in November 2018, Andre Pemmelaar was chief trading officer at Japan-based crypto-exchange Quoine, now called “Liquid”, where he led the development of an ‘algorithmic liquidity provision engine’ from Jan-17 to Nov-18. Diginex’s chief technology officer Ray Hennessey was also CTO at Quoine from Oct-17 to Oct-19. He joined Diginex in September 2019 (see below for Linkedin profiles).

Instead of disclosing their connection to Quoine in its prospectus, Diginex opted for a more general description when describing their background: “one of the largest bitcoin spot market exchanges, based in Japan”.

In April 2017, the algorithm for Quoine’s platform resulted in a multi-million dollar trade error. Quoine reversed the faulty trades upon discovering them, at its own discretion. It was sued in the Singapore International Commercial Court for breach of contract by the counterparty that benefited from these trade errors. The Singapore Court of Appeal ruled against Quoine after a three year legal battle.

Apart from this major blunder, business news provider ‘The Ken’ wrote an investigative report — published in August 2020 — that alleged Quoine overstated its user numbers and total trading volumes, according to insider information.

LinkedIn profiles for Pemmelaar and Hennessey